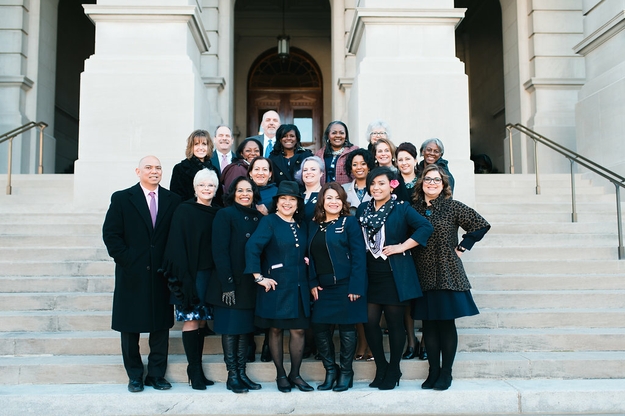 ATLANTA, GA – January 30, 2018 – Hundreds gathered at the Georgia State Capitol today to urge legislators to support proposals which seek to enhance domestic and sexual assault survivor’s safety.  A proposal led by the Georgia Coalition Against Domestic Violence (GCADV) seeks to mirror existing federal law by making it a felony crime for domestic violence perpetrators to possess a firearm. GCADV’s proposal specifies that a felony penalty will be imposed if the perpetrator is subject to a final Family Violence Protective Order or is convicted of a qualifying family violence-related misdemeanor.

GCADV’s public safety proposal was one focus of today’s Stop Violence Against Women Day, an annual advocacy event which draws attention to the issue of domestic violence and sexual assault in Georgia. Georgia currently ranks 14th in the nation for the rate at which women are killed by men.  In the years between 2010 and 2015, 529 Georgians were killed by firearm in domestic violence incidents. Housing protections for victims of domestic violence, sexual assault, and stalking was also a focus issue of the day. Often, rental lease agreements can create a barrier of access to safe housing for domestic and sexual violence victims. The proposed Georgia Tenant Protection Act seeks to address this by extending permissions, which would allow survivors to terminate a lease agreement early without financial penalty.

Stop Violence Against Women Day is a collaborative event hosted by GCADV, Georgia Commission on Family Violence (GCFV), Georgia Network to End Sexual Assault (GNESA), Raksha, and Caminar Latino, and sponsored by Mary Kay Inc. Stop Violence Against Women Day is important to both domestic violence survivors and the programs that serve them. This is an opportunity for individuals across the state to engage with their legislators, to advocate for necessary changes to our laws to improve victim safety, and to share the critical, life-saving work domestic violence programs do with their constituents," said Jennifer Thomas, Executive Director of GCFV.

“Organizations such as GCADV and GNESA give voice to victims of domestic violence and sexual assault. Our priority is to ensure their well-being, safety, and access to justice. The firearms proposal GCADV has put forward is in response to this charge,” said Jan Christiansen, GCADV Executive Director. “When roughly 70% of domestic violence related homicides in Georgia each year are committed using firearms, we must act.”

Stop Violence Against Women Day is supported by Mary Kay Inc., which also provides funding to organizations in Georgia and throughout the country that work to end violence against women.  "The Mary Kay FoundationSM is proud to have donated more than one million dollars in the state of Georgia alone to shelters providing direct services to domestic abuse survivors,” said Anne Crews, Vice President for Mary Kay Inc. and board member of The Mary Kay Foundation℠. "Mary Kay is immensely proud to stand alongside these advocates in our efforts to end and prevent domestic violence in our communities once and for all."

At Mary Kay, success lies in our dedication to irresistible products, a rewarding opportunity and positive community impact.  For more than 54 years, Mary Kay has inspired women to achieve their entrepreneurial goals in nearly 40 countries.  As a multibillion-dollar company, we offer the latest in cutting-edge skin care, bold color cosmetics and fragrances. Discover more reasons to love Mary Kay at marykay.com