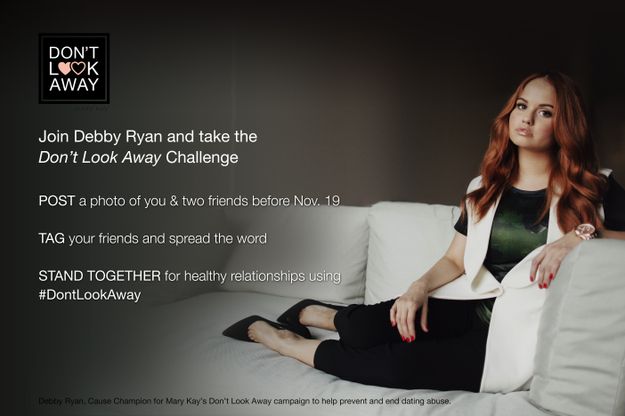 Today, 1-in-3 teens experience abuse in a dating relationship. Mary Kay and Debby Ryan are working to combat this startling statistic by raising awareness and promoting the importance of healthy relationships. Along with Mary Kay, Debby Ryan is passionate about speaking out against dating violence and abuse. Through the Don’t Look Away challenge, she is urging her fans to build awareness and support for healthy relationships on social media by posting a picture with two friends using #DontLookAway.

DALLAS – Nov. 5, 2015 – Today, Mary Kay Inc. and Debby Ryan launched the Don’t Look Away Challenge. Building off the success of Mary Kay’s Don’t Look Away campaign, Debby Ryan is asking teens to stand together with their friends and show their support for healthy relationships on social media.

Today, 1-in-3 teens experience abuse in a dating relationship. Mary Kay and Debby Ryan are working to combat this startling statistic by raising awareness and promoting the importance of healthy relationships. Along with Mary Kay, Debby Ryan is passionate about speaking out against dating violence and abuse. Through the Don’t Look Away challenge, she is urging her fans to build awareness and support for healthy relationships on social media by posting a picture with two friends using #DontLookAway.

“Dating abuse is a huge problem, and it needs to be talked about all year round – not just during Domestic Violence Awareness Month,” said Debby Ryan. “I am proud to be launching the Don’t Look Away Challenge with Mary Kay. The statistic that 1-in-3 teens experience abuse in a dating relationship is unacceptable and it’s important for teens to understand that they can support each other and stand up against abusive relationships.”

Data from Mary Kay’s sixth annual Truth About Abuse survey reveals that while Americans are more aware of the issue of domestic violence, many still do not recognize the signs of abuse. The survey also points to the critical need for increased awareness and early education about healthy relationships.

We’re excited to kick off this national challenge with our cause champion Debby Ryan,” said Crayton Webb, Vice President of Corporate Communications and Corporate Social Responsibility for Mary Kay Inc. “This year’s Truth About Abuse survey underscores a critical need for increased education about healthy relationships, especially among young teens. By encouraging teens to stand with their friends and not look away from abuse, the challenge enlists the support of young people to help prevent and ultimately end abuse.”

Both the challenge and the 2015 Truth About Abuse survey are part of Mary Kay’s “Don’t Look Away” campaign which works to educate the public on recognizing the signs of an abusive relationship, how to take action and to raise awareness for support services. To date, Mary Kay Inc. and The Mary Kay FoundationSM have given $50 million to domestic violence prevention and awareness programs in an effort to end the cycle of abuse. Mary Kay is also the lead sponsor of the nation’s first-ever text-based helpline operated by loveisrespect. By simply texting ‘loveis’ to 22522, teens and young adults are safely and discretely connected to trained peer advocates who provide support, safety tips and referrals for their own relationships or a friend’s.

Irresistible products. Positive community impact. Rewarding opportunity. For more than 50 years, Mary Kay has offered it all. With 3.5 million Mary Kay Independent Beauty Consultants and $4 billion in global annual wholesale sales, Mary Kay is a top beauty brand and direct seller in more than 35 markets around the world. Discover what there is to love about Mary Kay by connecting with a Mary Kay Independent Beauty Consultant at marykay.com.