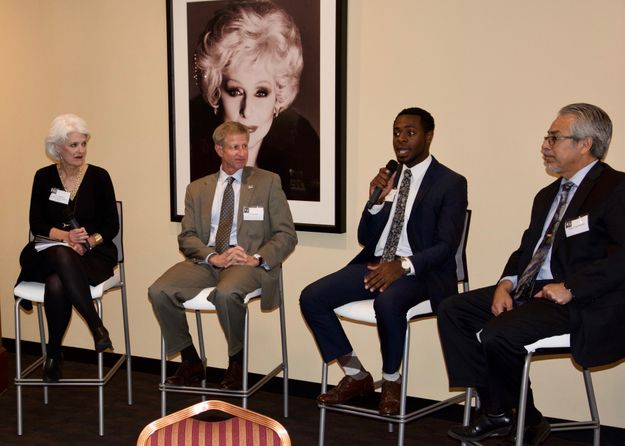 To inspire a national dialogue about the importance of engaging more men in the effort to prevent and end domestic violence, Mary Kay Inc. convened the inaugural Men Don’t Look Away Summit. Attendees, including domestic violence advocates from across the country, received a framework to engage men as advocates, volunteers and ambassadors at a grassroots level, learning to activate this powerful group of change-makers within their local organizations.

DALLAS – Nov. 3, 2016 – To inspire a national dialogue about the importance of engaging more men in the effort to prevent and end domestic violence, Mary Kay Inc. convened the inaugural Men Don’t Look Away Summit. Attendees, including domestic violence advocates from across the country, received a framework to engage men as advocates, volunteers and ambassadors at a grassroots level, learning to activate this powerful group of change-makers within their local organizations.

“Supporting a national dialogue to involve more men in this public health epidemic is critical in our continued efforts to prevent and end domestic violence,” said Jan Langbein, Chief Executive Officer for Genesis Women’s Shelter & Support.  “Mary Kay’s Men Don’t Look Away Summit has provided a much-needed platform for women’s shelters, national domestic violence organizations and community leaders to share best practices and ultimately foster a movement of change including a social norm that does not tolerate violence against women.”

“The data revealed in this year’s Truth About Abuse Survey underscores the importance of Mary Kay’s first-ever Men Don’t Look Away Summit,” said Crayton Webb, Vice President of Corporate Communications and Corporate Social Responsibility for Mary Kay Inc. “Ending domestic violence is a key tenet of our Mary Kay corporate culture and through hosting this inaugural national summit, we know we are addressing the overwhelming need to encourage more men to become change-makers within their communities while taking a stand against domestic abuse.”

The Men Don’t Look Away Summit and Truth About Abuse Survey are part of Mary Kay’s Don't Look Away campaign which works to educate the public on recognizing the signs of an abusive relationship, taking action and raising awareness for support services. To date, Mary Kay Inc. and The Mary Kay Foundation℠ have given $53 million to domestic violence prevention and awareness programs in an effort to end the cycle of abuse.