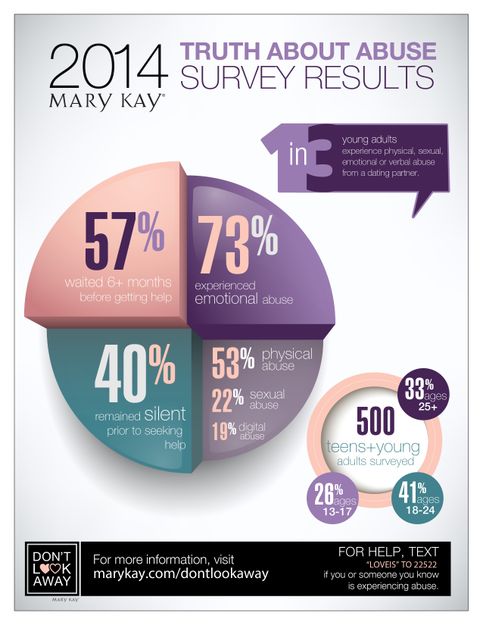 DALLAS – OCT 17, 2014 – Silence speaks volumes. A new survey reveals that young men and women continue to grapple with various forms of dating abuse including emotional, sexual, physical and digital abuse. Seventy three percent reported they are experiencing or have experienced emotional abuse while more than half of all respondents waited six months before seeking help. In partnership with loveisrespect, the 2014 Mary Kay Truth About Abuse Survey aimed to understand how long teens and young adults wait before they reach out for help and gauge what type of abuse is most prevalent among those who seek help.

More than 500 young men and women nationwide anonymously shared their stories with these key findings:

The 2014 survey is the latest part of Mary Kay’s "Don't Look Away" campaign which works to educate the public on recognizing the signs of an abusive relationship, how to take action and to raise awareness of support services.

“Once again the annual Mary Kay Truth About Abuse Survey, unveiled meaningful and insightful data on the alarming trends of violence against women in our country. But perhaps more importantly, this year’s survey shines a new light on what’s really happening among our youth in their relationships,” said Crayton Webb, Vice President of Corporate Communications and Corporate Social Responsibility for Mary Kay Inc. “It’s extremely alarming to learn that 73 percent of teens and young adults have experienced emotional abuse in a relationship and most are waiting six months or more to seek help or support. We need to prevent and ultimately end dating abuse by making sure young people know where and how they can get help before relationships become unhealthy and potentially violent.”

To empower youth and young adults, Mary Kay is the lead sponsor of the nation’s first-ever text-based helpline operated by loveisrespect. By simply texting ‘loveis’ to 22522, teens and young adults are safely and discretely connected to trained peer advocates who provide support, safety tips and referrals for their own relationships or a friend’s.

“The stories we heard through the Mary Kay Truth About Abuse Survey were powerful – from ‘I need help getting away from him’ to ‘I feel isolated’ to ‘I didn’t have anyone else to talk to’ and so many more,” said Brian Pinero, Director of Digital Services for the National Domestic Violence Hotline and loveisrespect. “To understand when and how teens and young adults reach out for help and what type of abuse is most prevalent in this day and age are important tools in providing the right resources to help more people build healthy relationships.”