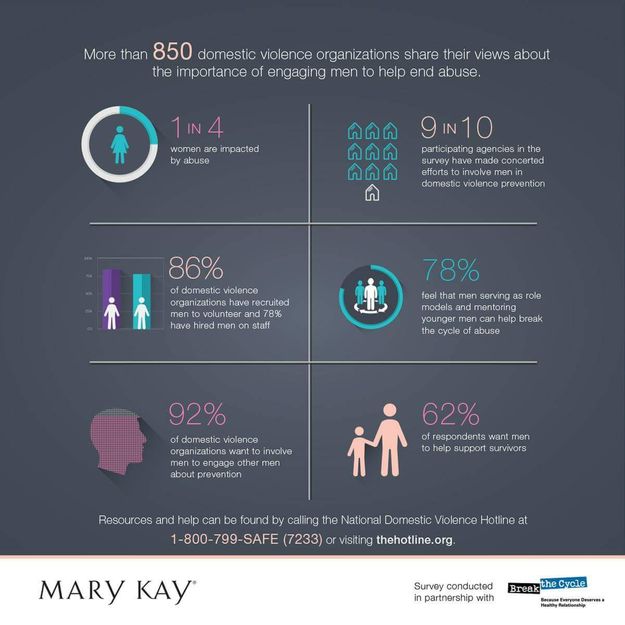 Domestic violence is not just a women’s issue. That’s the key message that resonated among more than 850 domestic violence organizations nationwide in Mary Kay’s 2016 Truth About Abuse Survey, which reveals that nine out of 10 participating agencies have made concerted efforts to involve men in domestic violence prevention.

In partnership with Break the Cycle, the Mary Kay seventh annual Truth About Abuse Survey found that an overwhelming 92 percent of domestic violence organizations believe it’s important to engage men in prevention and education efforts. Nearly half cited domestic violence as a community issue that is everyone’s business.

DALLAS – Oct. 3, 2016 – Domestic violence is not just a women’s issue. That’s the key message that resonated among more than 850 domestic violence organizations nationwide in Mary Kay’s 2016 Truth About Abuse Survey, which reveals that nine out of 10 participating agencies have made concerted efforts to involve men in domestic violence prevention.

In partnership with Break the Cycle, the Mary Kay seventh annual Truth About Abuse Survey found that an overwhelming 92 percent of domestic violence organizations believe it’s important to engage men in prevention and education efforts. Nearly half cited domestic violence as a community issue that is everyone’s business.

“As a corporate leader in the fight against abuse, we know domestic violence is a public health epidemic, and the only way to end abuse is to involve everyone in our communities,” said Crayton Webb, Vice President of Corporate Communications and Corporate Social Responsibility for Mary Kay Inc. “The data from this year’s Truth About Abuse Survey further supports our company’s efforts to not only include men in a national dialogue about the issue but also to encourage them to become agents of change who take a stand against an issue that impacts one in four women.”

Highlights from the survey include:

“Men play an important role in the ability to create social norms that do not tolerate violence against women,” said Amy Sanchez, Chief Executive Officer for Break the Cycle. “Simply stated, we need men to take a stand with other men. The Mary Kay Truth About Abuse Survey underscores the vital importance of involving men in nationwide domestic violence prevention and education efforts.”

In response to the overwhelming data revealed in the survey, Mary Kay Inc. will host an inaugural Men Don’t Look Away Summit on Nov. 2 in Dallas. Attendees, including men and domestic violence advocates from across the country, will receive a framework to engage men as advocates, volunteers and ambassadors on a grassroots level, activating this powerful group of change-makers within their local organizations.

The Men Don’t Look Away Summit and Truth About Abuse Survey are part of the Mary Kay Don't Look Away campaign which works to educate the public on recognizing the signs of an abusive relationship, taking action and raising awareness for support services. To date, Mary Kay Inc. and The Mary Kay Foundation℠ have given $53 million to domestic violence prevention and awareness programs in an effort to end the cycle of abuse.

About Break the Cycle

Break the Cycle believes everyone has the right to safe and healthy relationships. As the leading voice for teens and 20-somethings on the issue of dating violence, Break the Cycle inspires and supports young people to build healthy relationships and create a culture without abuse. We work collaboratively, providing loveisrespect in partnership with the National Domestic Violence Hotline, to support young people through every stage of their dating lives. For more information, please visit breakthecycle.org.