Americans More Aware and Invested in the Issue of Domestic Violence 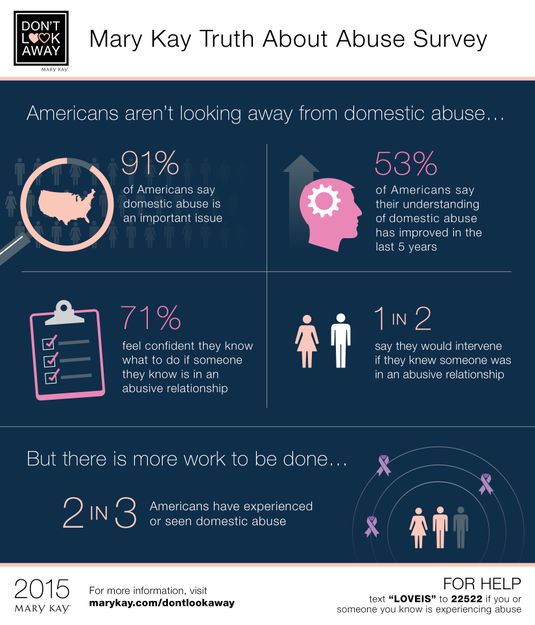 Today Mary Kay released the results of its sixth annual Truth About Abuse survey which reveals that while Americans’ awareness of domestic violence is on the rise, the full signs of abuse go unrecognized. The survey also reveals Americans believe increased education on healthy relationships can make a difference and millennials show confidence that the U.S. can end domestic abuse for the next generation.

DALLAS – Oct. 2, 2015 – Awareness isn’t enough to stop abuse. Today Mary Kay released the results of its sixth annual Truth About Abuse survey revealing that Americans’ awareness of domestic violence is on the rise. The survey also reveals Americans believe increased education on healthy relationships can make a difference and millennials show confidence that the U.S. can end domestic abuse for the next generation.

“This year’s Truth About Abuse survey showcases meaningful progress and highlights real opportunities to combat violence against women. Today, 1 in 2 male millennials believe domestic abuse can be eliminated in America. That is a powerful and very hopeful statistic,” said Crayton Webb, Vice President of Corporate Communications and Corporate Social Responsibility for Mary Kay Inc. “With increased awareness and earlier education, we can help prevent abuse and ultimately end domestic violence by teaching kids about healthy relationships from an early age.”

Highlights from the survey include:

“It is heartening to see that Americans are becoming more aware and invested in the issue of domestic violence,” said Brian Pinero, Chief Programs Officer at The National Domestic Violence Hotline and loveisrespect. “However, many are still struggling to recognize the signs of abuse and more education is needed to ensure that adults and teens are building healthy relationships.”

In partnership with loveisrespect, the 2015 Mary Kay Truth About Abuse Survey aims to explore how Americans’ understanding of domestic violence is changing, and gauge attitudes with respect to this evolving issue. One thousand men and women nationwide participated in the online survey Sept. 3-11, 2015, sharing their insights and stories on the issue of domestic violence.

The 2015 survey is part of Mary Kay’s “Don’t Look Away” campaign which works to educate the public on recognizing the signs of an abusive relationship, how to take action and to raise awareness for support services. To date, Mary Kay Inc. and The Mary Kay FoundationSM have given $50 million to domestic violence prevention and awareness programs in an effort to end the cycle of abuse. Mary Kay is also the lead sponsor of the nation’s first-ever text-based helpline operated by loveisrespect. By simply texting ‘loveis’ to 22522, teens and young adults are safely and discretely connected to trained peer advocates who provide support, safety tips and referrals for their own relationships or a friend’s.

Irresistible products. Positive community impact. Rewarding opportunity. For more than 50 years, Mary Kay has offered it all. With 3.5 million Mary Kay Independent Beauty Consultants and $4 billion in global annual wholesale sales, Mary Kay is a top beauty brand and direct seller in more than 35 markets around the world. Discover what there is to love about Mary Kay by connecting with a Mary Kay Independent Beauty Consultant at marykay.com.